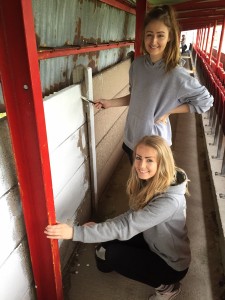 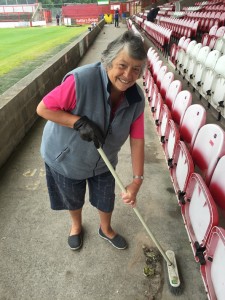 He visited Heywood Tanks, in North Manchester, where he took an Abbot 105 Howitzer Self-Propelled Gun for a spin around the field, loving every minute of his high-calibre adrenalin-fuelled joyride.

“It was awesome!” said Jesse, instantly recognisable with his trademark sideburns, shades and leather jacket.

“I had no idea when I left California for my trip that I’d get to drive a genuine British tank. I love the UK. You guys rock!”

Earlier in the day Jesse had been celebrity guest at Accrington Food and Drink Festival, where the tank was part of a military display. Back at Heywood Tanks HQ Jesse jumped at the chance to take the tank for a spin, soon getting to grips with its controls.

“I’ve driven all kinds of weird vehicles over the years, but this was my first time in a tank,” he said. “It was incredible and I want to thank Heywood Tanks for letting me do it.”

Now Jesse is hoping to attend this year’s Heywood Tanks ‘Yesteryear Festival’ if it coincides with his next UK trip planned for September.

Featuring around 50 military vehicles, plus agricultural exhibits and other vintage vehicles, the Yesteryear Festival takes place from 10am to 5pm on Saturday and Sunday September 12th and 13th. The venue is Heywood Tanks HQ at Collop Gate Farm, Manchester Road, Heywood (OL10 2PX).

As well as the chance to see tanks in action on the specially designed 100-acre site, other attractions include re-enactors, stalls, vintage clothing, a fairground, craft tent and beer tent. Admission is £5 for adults and £2 for children or £12 for a family ticket. Over the past two years the festival has raised more than £30,000 for the Springhill Hospice, in Rochdale.

Meanwhile, fans of Storage Hunters, the highest rating show when aired on UK TV’s Dave channel, can catch Jesse on the British spin-off, Storage Hunter UK. He is set to make a second guest appearance in the new series on Tuesday July 21st at 8pm on Dave, and watch out for fireworks when things get physical with one of his rival UK bidders!

If you are interested in booking Jesse McClure to appear at your event when he’s next in the UK, check the ‘Tour Dates’ section of his website: www.jessemcclure.co.uk

For more about Heywood Tanks, see their Facebook page.