Christmas shoppers are beating a path to Padiham’s high street after SDA sprinkled some festive magic on a Christmas shops and services campaign.

SDA designed, wrote and produced the flyer following the success of similar campaigns run by us in  nearby Accrington and Oswaldtwistle.

Funded by the businesses themselves, the flyer incorporates interactive elements like QR codes linking to profile videos of each business featured, which have all been uploaded to a brand new YouTube channel set up to support the campaign –

Featuring 21 shops and services advertising product offerings and promotional deals, the flyer is now being distributed to 37,000 homes in Padiham and surrounding areas like Read, Simonstone and Hapton, as well as being hand-delivered to primary schools, leisure centres and libraries ahead of the festive break.

A total of 40,000 copies has been printed and distributed by SDA after our pilot campaign in Accrington last year saw some businesses enjoy a 50% upturn in trade during the run-up to Christmas.

Tony Fitzgerald from Burnley Council said: “Padiham’s a great little town with brilliant, friendly shopkeepers and free parking. This new shops and services guide shows we’re trying every conceivable way of promoting Padiham to shoppers this Christmas and beyond.”

As well as shopping information, the flyer includes information about the town’s history, details of winter events and an overview of Padiham’s leisure facilities. And it’s getting a big thumbs up from all the shopkeepers who feature in the campaign.

Peter Rostron from A1 Motorstore said: “It’s just what the town needs. Shoppers will find it useful – our high street is filled up with fantastic shops and services so it’s a good idea to promote them in this way. We’re literally putting Padiham on the map!”

Carol Broadbelt from The Hardware Store said: “Bright and colourful with great photography – this leaflet really gives shoppers an insight into what’s available here in Padiham.”

Alison McLeod from Mooch Café 87 added: “It’s fantastic to all join together to let people know about the great things happening in Padiham.”

A Twitter account set up by SDA just months ago to support the project is already approaching 2,000 followers. Follow @PadihamShops for all the latest news, events, information and offers. 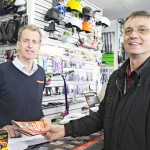 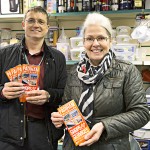 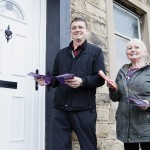