A Rusholme community arts organisation is celebrating the heritage of the area through a calendar of images – and Scott Dawson Advertising was delighted to provide the design and print.

The ‘Treasures of Rusholme 2017’ calendar, produced by Creative Rusholme using images by local artist and photographer Phil Barton, is on sale now. It features striking photographs of 12 key locations from across the area, including Georgian properties on Moon Grove, Manchester Central Mosque in Victoria Park, Whitworth Art Gallery, modernist icon The Toastrack and The Curry Mile.

Through the calendar Creative Rusholme aims to raise the profile of the local community and develop the huge cultural potential of the neighbourhood on Manchester’s Southern Corridor. The arts organisation believes Rusholme has so much to offer: two galleries, three parks, a major conservation area, and residents from all over the world including many thousands of young people.

“I was happy to provide my images free of charge to the project and work with Creative Rusholme to see it come to fruition. We hope that the calendar will encourage people to look anew at our wonderful neighbourhood and appreciate just how much there is to see and do in Rusholme.”

The calendar is being sold by volunteers from a variety of Rusholme community organisations. All money raised from the sale of the calendars will go straight back into the local community.

Local resident Elaine Bishop explains, “Local groups will share the proceeds from the sale of the calendars to help ‘green’ Rusholme, through tree planting and the planting of bee friendly plants, local food growing and arranging community clean-ups.”

Scott Dawson Advertising did the work free of charge as part of our commitment to supporting community endeavour.

There’s more information about the Rusholme area of South Manchester online at www.rusholmearchive.org/TreasuresofRusholmeCalendar2017

LIFE:STYLE Magazine plans to promote the positive side of Accrington and its surrounding areas appealing to tourists, business investors, heritage, music and culture fans. 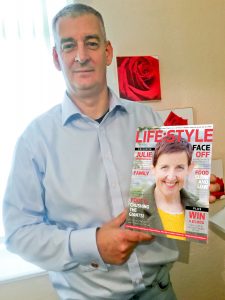 “I am thrilled to see a lifestyle magazine promoting the area and the very hard work going on behind the scenes by my office, the district council, and the many brilliant community groups we have here.”

Hyndburn MP Graham Jones, pictured, said: “I am thrilled to see a lifestyle magazine promoting the area and the very hard work going on behind the scenes by my office, the district council, and the many brilliant community groups we have here.”

Mr Jones added: “There is a thriving business community in Hyndburn and I hope members of this  community will step up to support LIFE:STYLE magazine and help get the positive aspects of the area out to a wider audience.”

Said a spokesperson for Scott Dawson Advertising, which will produce an autumn/ winter and spring/summer edition: “Like other areas of Lancashire Hyndburn also enjoys the benefit of bustling town life with both major retail and food chains and small independent shops and restaurants, picturesque parks and villages and breath-taking countryside – which is perfect for running, cycling and hiking enthusiasts.

“We wanted to produce a magazine to share all that is wonderful about the area.”

LIFE:STYLE Magazine promises to explore and encompass all aspects of the area’s rich ethnic diversity.

The first issue will feature a lively dinner debate between four Hyndburn men of Irish, English, Pakistani and Polish descent, about their varying views on Family Values.

Storage Hunters star Jesse McClure and his agent Murray Dawson (pictured) will cycle from Blackpool FC to Accrington Stanley FC on Saturday in the first event of a £40,000 fundraising bid.

The pedal-powered pair hopes their efforts will put £500 in the pot of the OASSC’s (Official Accrington Stanley Supporters Club) project #upinlights – which aims to provide an electric scoreboard facility at the Wham Stadium.

Joining them on the 58km ‘Pedal us to Glory’ ride will be Accrington Stanley’s Managing Director, David Burgess.

Says Jesse: “We hope to raise around £500 in sponsorship – although I still haven’t actually got a road bike yet! So if anyone has one they are willing to lend me – get in touch!

Jesse, whose new TV show British Treasure, American Gold, premieres on Quest on October 19th, adds: “If we raise more than £6,000 we’ll do it on a tandem. We haven’t discussed how much it would take to do it on a unicycle!”

Jesse’s agent Murray, Managing Director of Scott Dawson Advertising, said: “I wouldn’t say we’ve exactly been training hard– but a couple of laps around the car park – and we’re ready to do what we can to help the Club.

“As part of our Accrington Civic Pride initiative we were happy to print raffle tickets and flyers free of charge, as well as raise sponsorship deals, and help the official supporters club get closer to their £40,000 goal.”

The OASSC’S 2016/17 fundraising campaign #upinlights, include raffles, events and sponsorship.

The first on the agenda is the sponsored bike ride; Pedal us to Glory, which will start at Blackpool Football Club at 8.45am back to the Wham Stadium arriving before the League 2 fixture between the two clubs at 3pm on Saturday 15th October.

Fans can sponsor riders or purchase a raffle draw ticket, price £2, which will be on sale on match day or from committee members.

The draw will be made at half time at the Blackpool game and the prizes are:

You can sponsor Jesse and Murray at: https://www.justgiving.com/crowdfunding/murray-dawson

Or to find out about other events being organised by the OASSC, you can contact fundraising coordinator Mark Brennan 07913 080974 or via email markdonbrennan@gmail.com